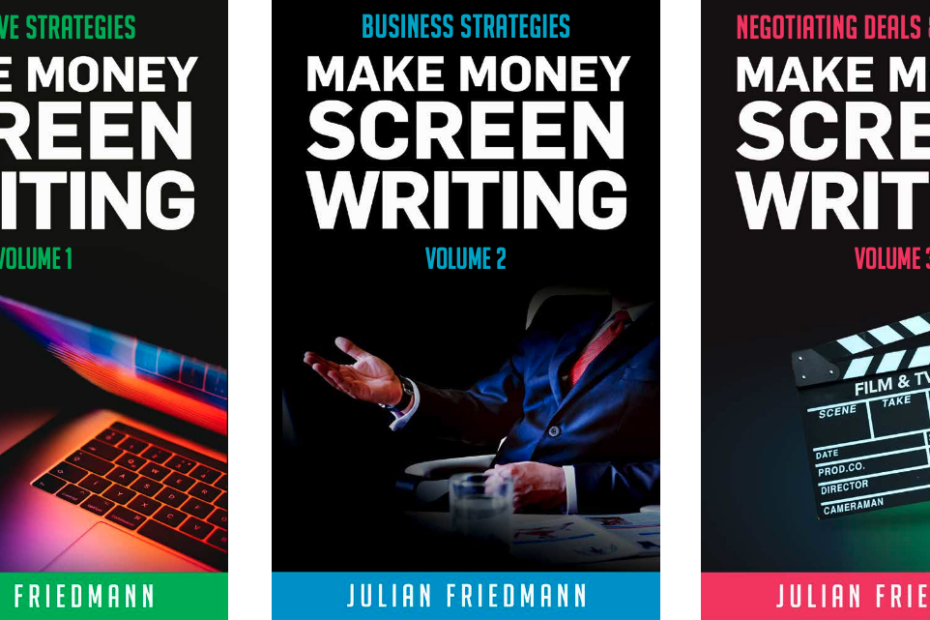 The books will be available to order in March 2021

There are also less talented writers who are more successful than more talented writers, sometimes because while they don’t write as well, they do ‘get’ the business aspects of being a writer.

It has always seemed unfortunate that writers were not able to learn easily from each other. Some training courses provide that opportunity in a limited way; the London Screenwriters Festival does so gloriously, with a wonderful delegate network.

Agents do it for their clients: what agents learn from selling one client they can apply to other clients, without ever revealing the source of information, whether it is about a great clause in a contract, an interesting new producer with a taste for whatever it might be, or all sorts of other discoveries about the industry .

Some years ago I realised that I could share more widely what I had learned. It started with the first two editions of my book HOW TO MAKE MONEY SCREENWRITING 25 years ago, and series of lectures all over the world. Then in a book THE INSIDER’S GUIDE TO WRITING FOR TELEVISION, written with Christoper Walker.

I tried to do it a twenty years ago with ScriptWriter Magazine, which I edited for 9 years, publishing over 800 articles on screenwriting. It became GROUNDHOG DAY, as we found ourselves publishing articles on the same subjects over and over!

However, I decided to rewrite much of the 25 year-old book and publish it in inexpensive, shorter, themed volumes. That I realised needed a website to back it up. So here we are.

This website is for all writers, because successful writers can be more successful and new writers can learn from the wisdom of many writers who went before them.  It is for novelists as well as script (or screen) writers.

When the original book came out I was thanked by another agent, who warned me that he would be greater competition for me as he now knew my secrets.

I told him that there were far more writers than all the agents in London could represent, and if all writers were more savvy about how to do deals and contracts and how not be exploited, and how to write better, it would benefit all of them as well as us, him as much as me.

So in a way this is your website. Send in questions about the industry, but please don’t send stories or pitches or scripts. I am afraid they will not be read. And since I won’t read your ideas, I cannot advise on where to submit them.

In the three volumes you will discover what you need to do to begin to find out that kind of information. Or sign up for the wonderful London Screenwriters Festival, whose delegate network is a great place to start. Check it out at

But send me questions about deals and contracts and the other aspects of the industry which the three volumes cover, and I will try to answer them. Be patient please. I have a day job (two actually – the Literary Agency and also a small production company). I am also diving in to the fascinating world of self-publishing (I never realised how much money could be made if you write romances or crime novels), I have 11 grandkids and a garden and bonsai trees and a life. Even if I gave up the jobs I’d be too busy to retire.

I hope this website and the books will be useful.